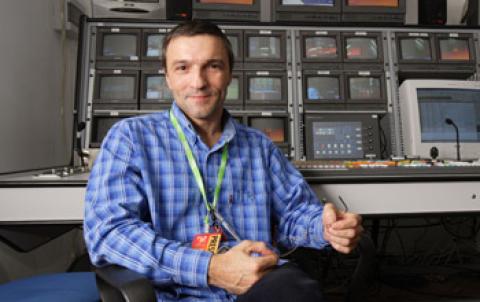 Just 2 weeks after he was appointed to manage Realitatea TV and received the mission to start a restructuring process within the station, Gabriel Bugnar unexpectedly announced he resigns from te position and quits the TV station.

He send a letter to his colleagues, that we present below:

Two weeks ago, when I accepted to manage Realitatea TV, I hoped the crisis moment could be surpassed and that, through dialogue with the ones that have the financial destiny of Realitatea Media in their hands, the problems can be, slowly, solved. Today, exactly 2 weeks after, I am forced to present my resignation.

It is impossible for a TV that posted in the 1st semester monthly losses between Euro 600,000 and Euro 1M to get to zero debts all of the sudden or, if possible, to get on profit. In the 1st semester, the money from advertising revenues weren’t even enough to cover the salaries. How does Realitatea still exist? This is a question.

The ones that have now the financial power made all it was possible to cut costs, leaving aside the current debts, accumulated during last months (historical debts aren’t in discussion). I hope that the existent resource Realitatea has to keep the company on the floating line.

During the 2 weeks, I could see the financial disaster the TV is in. Redaction, people, are the biggest investment of Realitatea. Without them, Realitatea doesn’t exist. It is just a pile of overworked tools and insolvency acts. During the 8 years I spent in this TV, I saw coming “getting born” in TV all those that are now somewhere else and I also saw everyone working now coming here.

Yesterday, the payment day, I lived terrible moments: a colleague came to me with tears in her eyes to ask me to put a good word with the financial department so she can get at least the due payment for one month, so she can send her kid to study in another country, where her daughter, after a lot of work, was accepted. Another colleague came to ask if the salaries will be given, as she didn’t have any money for subway so she can make it at work.

Another colleague that got his kid admitted as an emergency at the hospital and called me, late at night, to ask me about the money. I can continue with yesterday’s and today’s examples and maybe this aren’t even the most dramatic cases.

I did all it depended on me, hoping to save Realitatea TV from disaster. I have no decision money in what money are concerned in a company that’s in insolvency. I don’t know if those who can make decisions are ready or not to support financially the TV in a real restructuring program, that cannot be implemented over noght. I hope the restructuring process would be possible with whatever means exist right now, but I have serious doubts.

From all these motives, for me, the 8 working years for Realitatea TV end here.