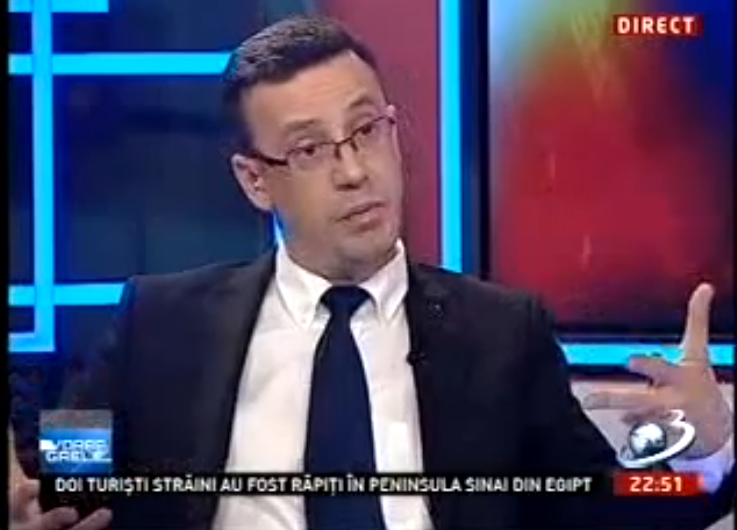 Victor Ciutacu, host of Antena 3’s “Vorbe grele” (Heavy Words – n.r.) show, decided to leave Intact Trust and join the team of Romania TV channel. Ciutacu announced his decision on his own blog, in an article entitled “Thanks for everything, good bye”.

Ciutacu says, on his blog, that “a professional and life cycle is ending. After almost 9 years (from which over 6 also on TV), I am leaving Intact trust. It was the longest (and most pleasant) job I had. And, in 20 years, I had went through some”

Writing on his blog about switching to Romania TV, Ciutacu says:

“I’ve chose Romania TV that– oh, yes! – even insulted me. I’m leaving from the authorial leader to an aspirant, it’s not the first time when I start from zero.(…) I am aware of the image and career risks. But I’m an ambitious guy”.

Contacted by Paginademedia.ro, Victor Ciutacu said that, over the time, he had more offers from Sebastian Ghita, owner of Romania TV.

“There were more offers over the time. Now, there was a new offer and I considered that the time came to also think of myself”, Ciutacu said, for Paginademedia.ro.

“I don’t have anything to reproach to people at Intact. I leave as quiet as I came. There’s no scandal involved. Today the announcement at Jurnalul National was made and now I’m gathering my stuff. After I get my stuff here, I go to Antenas, to my colleagues there”, Ciutacu added

Victor Ciutacu also said he is officially in Romania TV’s team starting April 1 st and hopes that, on April 15th the latest, he will also be in the air again as he is ready anytime and used with daily shows.

In what concerns his show on Romania TV, Ciutacu said it’s probably going to be a political daily show.

Mircea Badea had a short reaction on his blog related to his colleague, Victor Ciutacu, leaving from Antena 3 to Romania TV: “Victor Ciutacu made a decision. I thank him for all common professional adventures. We stay friends”

Sorina Matei, RTV journalist and future colleague with Ciutacu, also wrote on her blog about him coming to the TV she works for: “My opinions on Ciutacu person didn’t change and will never change”.