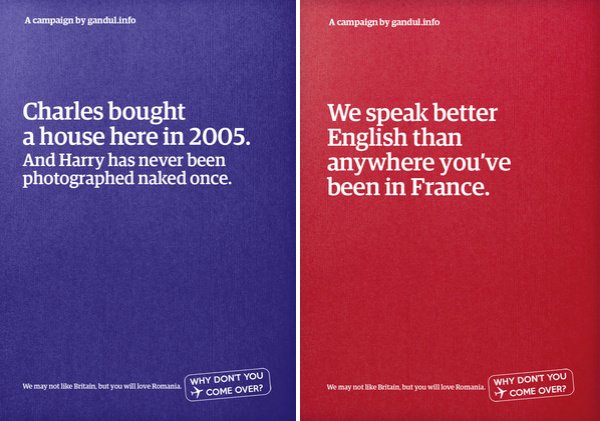 “Why don’t you come over?”, a campaign made by GMP Advertising and Webstyler for Gândul.info (Mediafax Group), was awarded Grand Prix in Digital, Golden Drum in PR and Silver in Integrated campaigns at the advertising festival Golden Drum (Slovenia). At the same festival, McCann Erickson and “Bucharest not Budapest” campaign for ROM also got a multitude of trophies.

“Why don’t you come over?” came as an answer from Gandul.info, GMP Advertising and Webstyler to the British intention to stop Romanians’ migration in UK, once the restrictions on the labor market are removed, in January 2014. In two weeks after launch, the campaign spreaded all over the workd, involving actively hundreds of thousands of Romanians and generating over 100 appearances in the international press.

Case Study Why don`t you come over

McCann Erickson and “Bucharest not Budapest” for ROM also gathered multiple prizes at Golden Drum. The campaign aimed to eliminate the confusion generated by the name similarity between Romania’s and Hungary’s capitas.

• Golden Drum in “New or Innovative”

Also, entries from Ogilvy Romania and Publicis Bucharest made it until the finals, being present on shortlists

This year, 113 of the total 1395 entries submitted to this year’s Golden Drum come from Romania, according to a press release from festival’s organizers. According to the provided numbers, Romania’s participation in this year competition decreased compared to 2012, when Romanian agencies were present at the awards with 132 entries.