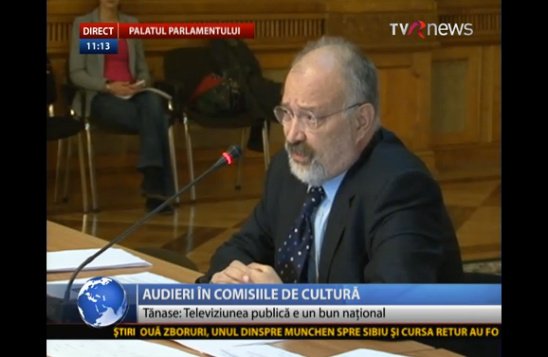 Stelian Tanase, PNL’sproposal for state TV’s president general manager, received the approval vote of Romanian Parliament, being appointed ad interim on the job, for a period of up to 6 months.

Stelian Tanase is the second proposal of PNL for the job; first, the party came up with Rares Bogdan as candidate, but this proposal didn’t passed in Parliament because of lack of cvorum.

Before being voted in Parliament, Tanase received unanimity of votes from Mass-Media and Culture Committees.

Rares Bogdan, initial candidate for the job that wasn’t voted by Parliament because of lack of cvorum, withdrew his candidature. Romanian prime minister, Victor Ponta, and Razvan Martin (Active Watch) expressed reserves over this candidate. Martin even appreciated that Bogdan’s candidature is a political move to distroy public television.
Besides Rares Bogdan, another option for TVR’s management was Valentin Nicolau, supported by PSD, as political sources quoted by Mediafax stated. Valentin Nicolau was previously president general manager at TVR during Nastase government, between 2002-2005.