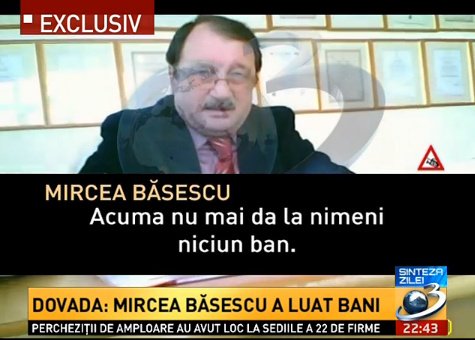 The recordings with Mircea Băsescu, brother of Romanian president Traian Băsescu, and Bercea Mondial’s son were broadcasted by Antena 3, during Sinteza zilei show.

The program was watched by hundreds of thousands of Romanians every minute, with Antena 3 ranking 2nd on urban audiences and 3rd on national level.

The show that broadcasted the recordings was broadcasted during a time interval which intersected with a part of Spain-Chile football match, with 2 entertainment shows on Antena 1 and with the movies on Pro TV.

Antena 3 made public, Wednesday night, video images with talks between Mircea Basescu and son of Bercea Mondial; Mircea Basescu is saying that he received $ 250.000 during discussions related to an alleged influence over judges to release Bercea, which executes a 9 years in prison sentence. Mondial’s son made a criminal complaint against Mircea Basescu for traffic of influence, deception and inducing in error judicial institution related to a case in which he himself is accused of blackmail.