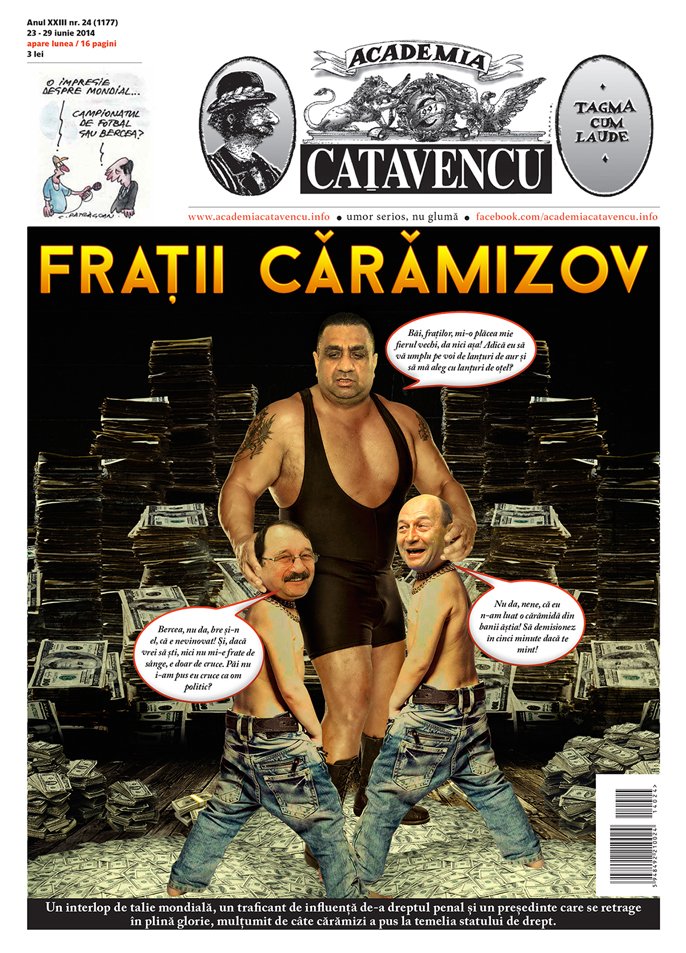 Academia Catavencu fragmented yet again, after more journalists decided to suspend their activity as they didn’t receive their salaries for 3 months. Still, the publication appeared on the market with a new edition, written by a few people that decided to stay.

Adrian Rus, publication’s manager, sent a message to the journalists that left, saying they won’t see their restant salaries as the results of their work aren’t valuable and because the money would cover some of the prejudice they brought to the publication by using in an unappropriate manner Catavencu’s Facebook page to relay their messages.

The reaction the redaction sent to pagina de media says: “Academia Catavencu’s redaction is not going to write for free, following the trust’s administrator command, with the approval from the doorman and the supervisation from the cleaning lady”.
The journalists that left announced, on publication’s Facebook page, that they received from Rus a document in which they were announced by the “unilateral” ending of their contract and demanded them to sign the document to give up, in a commonly agreed manner, the restant salaries.

As the resigned journalists still have the management of publication’s Facebook page, they informed the public that Rus tried to “bribe” one of them by even paying his salary in advance in order to hand him the administration for the Facebook page.
Also, the journalists also mention that all the materials in newly published edition of Academia Catavencu were written by a single person: “Gabriel Tudor (Spartakus) decided to work in the conditions we blamed”
The edition that appeared on the market was made by a few people that decided to remain with the publication. Also, the redaction that decided to remain with Academia Catavencu said, in a press release, that the ones that quit are “rebels without a pause”.
The press release from the team that stayed with Academia Catavencu says that “what those rebels without a pause didn’t understand is that Academia Catavencu didn’t started nor ends with them. Academia Catavencu isn’t Mazilu’s as it wasn’t Buscu’s, doesn’t belong to Rus as it didn’t belong to Dinescu, wasn’t Adamescu’s or Vantu’s. And that is because Academia Catavencu isn’t a magazine where you get hired, write what you write and, when you go crazy, close the store just because you feel like it – and even leave home with magazine’s Facebook page to make it a poster in your bathroom. Academia Catavencu is a state of mind that doesn’t belong to a single Romanian or to a group of Romanians, but to all Romanians (…) “Academics” don’t stop here, as the caravan doesn’t stop at stray dogs bark. We are goin forward, without braging that us and only us, the one that stayed, would be Academia Caţavencu”.