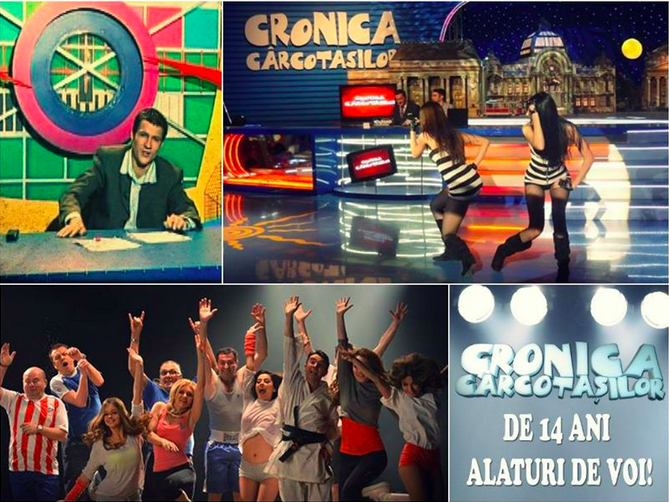 After 14 years, Mihai Găinuşă decided to leave Prima TV’s Cronica Carcotasilor program, realized together with Şerban Huidu. During the meeting when Găinuşă announced he leaves, another member at the team, Codruţ Kegheş – Dezbrăcatu’, did the same.

In a short interview for Paginademedia.ro, Gainusa gave some info on what happened and on what he is going to do next, with the bottom line being he will continue to be on TV.

Gainusa said that, during the meting he attended, he and Codruţ Kegheş announce they leave the team. He added that occurred after he received an SMS from Huidu in which he was asked to think it through because Cronica will continue to another TV or will vanish and he also added that each member of the team should look for a job during the summer.

Gainusa added that, following a talk with Burci, he will remain on Prima TV and is involved in a new project together with Kegheş, a new satire show for the autumn schedule. He also added that this isn’t easy, as he worked for Cronica for 14 years, but cannot find himself anymore in the program that’s broadcasted in the present.
At his turn, Burci said he thinks the show will go on and he would like to keep the brand but it depends on how Huidu will reorganize. He also said that, after Gainusa explained the new project, he agrees to it.

After Gainusa and Dezbracatu announced their departure, Huidu made public a message in which he thanked them in the name of all their colleagues for what they did and said he lived one of the most bitter days of his life hearing the 2 didn’t “find themselves anymore” in the show and also said that maybe others will follow.

Serban Huidu: Nothing upsets me most than lack of loyality. Cronica is a very strong format and can go on
After the 2 left and a 3rd followed, Huidu said, in an interview for Paginademedia.ro, that nothing upsets him more than the lack of loyality: “I am a very loyal guy, I am in Prima for 14 years and I only switch the place once and if there’s something that strongly upset me is the lack of loyalty”.

Huidu belives the break up started long time ago and accumulated, over time, a lot of frustration and unfilfillment. But the show goes on, he added.
“Cronica Carcotasilor is a very strong format and can go on. Cronica isn’t just a satire, humour and entertainment show. The show nurtured the idea of cleansing the society, through humour. Cronica uses humour, but let’s not forget that, at its roots, it’s an opion show”, said Huidu
Huidu said Cronica’s future will be established and added he didn’t speak with another TV. On the new show, he declined to offer details, but said the format will be respected, without excluding new possible sections. He also added he spoke with Burci and Prima officials about show’s future and they say they will o forward, although things are more complicated than that.