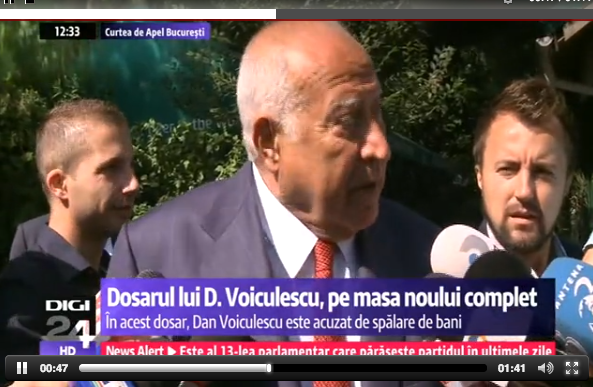 The Appeal Court Bucharest and the 2 magistrates that are judging the file on ICA (Food Research Institute) privatization extended the insurance seize over more goods owned by Dan Voiculescu and other people accused in the lawsuit, Mediafax writes.

ICA’s privatization lawsuit continues on July 7th, when the accused people that want to make statements will be heard.

The seize was extended over more shares and spaces donated by Voiculescu to his daughters, Camelia and Corina.

Intact Group issued a statement, on July 3rd, saying that the insurance seize imposed by justice in ICA lawsuit doesn’t have anything to do with the media trust and nor does the operations ran by the mentioned company

After he was subjected to DNA hearings, Voiculescu was expected by journalists and reacted irritated when a reporter asked him about ICA’s privatization, which prejudiciated the Romanian state with Euro 60M.
A journalist from Gandul.info insisted to find out how Voiculescu was able to buy an institute as valuable as ICA with only $150,000, an initiative that irritated Voiculescu.