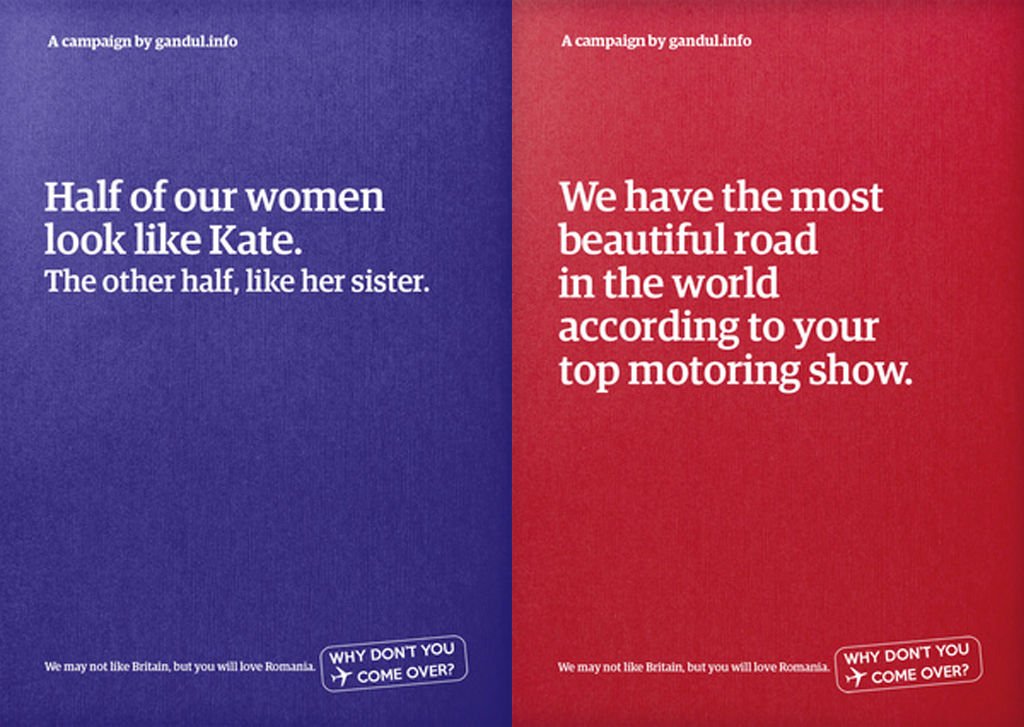 “Why don’t you come over” is the answer Romanian gandul.info gave to the intention of British ministers to launch a campaign aimed to convince Bulgarians and Romanians not to assault UK after the restrictions on labor market will be eliminated. Gandul.info wants to answer with the campaign to “UK authorities’ fear towards Romanian invaders”.

Some of the slogans used within the campaign are “We may not like Britain, but you will love Romania. Why don’t you come over?”, „Charles bought a house here in 2005. And Harry was never photographed naked”, “We speak English better than anywhere in France”.

The campaign also stirred reactions in UK, as The Guardian asked them to come up with their own creations to help keeping immigrants away from Great Britain.

More and more British publications are covering extensively the answer from Gandul.info and GMP Advertising to UK authorities’ reaction on the “impending wave” of Romanian and Bulgarian immigrants after the labor restrictions on the UK market will be eliminated.

After the subject was covered by Huffington Post and Channel 4, The Independent followed, with an article headlined “Worried about immigration? Then come to Romania - all our women look like Kate and Pippa”

British journalists don’t forget to mention London’s fears on removing the visa restrictions and to underline the average salary in Romania and Bulgaria, which is around 300 pounds.

“The British have the best humour - but we’re quite good too (…) Most of us are decent, hardworking people who pay their taxes, in Romania, or in the UK and majority of Romanians in the UK help the economy (…) The image of Romanians in the British and European press is biased… We like spending time with our families, going to the pub with our friends after work. We’re exactly like everyone else”