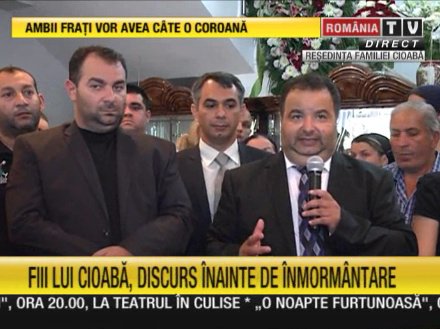 Using the death of Cioaba – self proclaimed king of rromas – proved to be profitable for news TVs, with Romania TV managing to outrank Antena 3 in audiences when it came on daily averages. Ghita’s TV was also on Fridey close to Voiculescu’s station, and, on Saturday, outranked it at national level

Friday, when Florin Cioaba was buried, all news TVs dissected the subject and the ratings exploted: compared to August 16th, the audiences are significantly higher – in tens of percentages.

Adding together the market shares, it results that almost 19% of the Romanians that watched TV on Friday watched a news TV

Antena 3: was the most watched news channel during the day Cioaba was buried. Daily average: almost 150.000 viewers per minute (+42% compared to August 16th).

Realitatea TV: Cioaba’s funeral was almost not felt at this station. August 23rd ‘s average was almost equal to the one in the previous Friday

Cumulated, almost one in 5 people living in urban areas that were watching TV was on a news channel (20%).

Cioaba generated an unexpected result for Romania TV. With debates related to the succession at Cioaba’s crown, Ghita’s station overrun Antena 3 on Sunday, in terms of daily average audience, both in urban and rural areas.

The results were tight also on Saturdat, when Romania TV was over Antena 3 at national level, but behind it in urban areas.