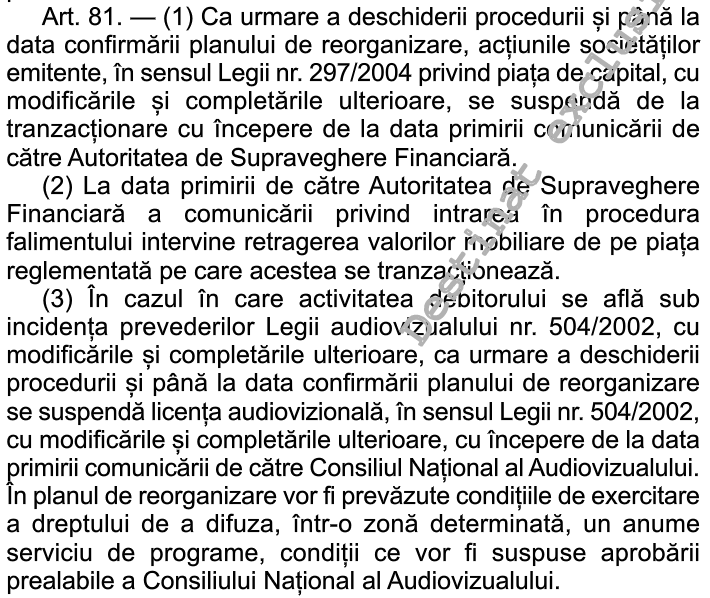 CNA and People’s Attorney took position against the Insolvency Code, with the audiovisual regulator stating it wasn’t consulted about the article on insolvency procedure for debtors active in media audiovisual field. At its turn, People’s Attorney contested the code and mentioned measure at Romania’s Constitutional Court. On the other hand, Romanian Supreme Magistrates Council demands a delay in applying the new Insolvency Code.

CNA mentioned, in a letter sent to Romanian Parliament, that “our institution wasn’t consulted related to the content of art 81 from the new Insolvency Code, that refers to insolvency procedure for “debtors” that are active in media audiovisual field, as Audiovisual Law states”.

CNA sent a document with observations on the new Insolvency Code to the 2 Culture Commisions in Romanian Parliament. Valentin Jucan was the only CNA member that proposed the document to include a proposal to eliminate art 81, align 3, that states that TVs in insolvency would have their broadcasting license suspended until their reorganization plan is confirmed. His proposal didn’t receive any votes from the other CNA members .

“The document sent to the Parliament could have as an effect harmonizing the actual formulation with an aticle that could be applied without distorting the normal activity of a broadcaster”, CNA president stated .

In a document submitted to Constitutional Court, People’s Attorney invoked the unconstitutionality exception for art 81 align 3 and art 348 from the Governmental Emergency Ordinance 9/2013

OUG related to insolvence and insolvency states, in art 81: “If debtor’s activity is under the incidence of Audiovisual Law, as a consequence of opening the procedures and until the date when the reorganization plan is confirmed, the audiovisual licence is suspended from the moment when CNA receives the communication”

The ordinance also states that “the reorganization plan will include the condition to exercise the riht to broadcast, in a determined area, a certain programs service, conditions that will be submitted prealably to CNA’s approval”.

CSM demanded the new Insolvency Code’s application to be postponed, after it was adopted last week through an Emergency ordinance, Realitatea.net writes. If not postponed, the code will start producing effects on October 25th.

“Considering that most of our colleagues from all over Romania demanded postponing the application of the Insolvency Code, this demand was formulated to Justice Minister, which represents Romanian Government within CSM. We hope the Government will consider this demand”, CSM judge Horatiu Dumbrava said, according to Realitatea.net.

Key expert from the team working on Insolvency Code: “We didn’t agreed to licenses suspension”

The suspension of the audiovisual licenses article included in Insolvency Code wasn’t a proposal o the consortium that worked in putting up together the law project. The team of experts that worked at the new Insolvency Code didn’t agreed with the introduction of the article related to the suspension of the audiovisual license, as Arin Stanescu, key expert on juridical matters with the consortium, stated for Paginademedia.ro.