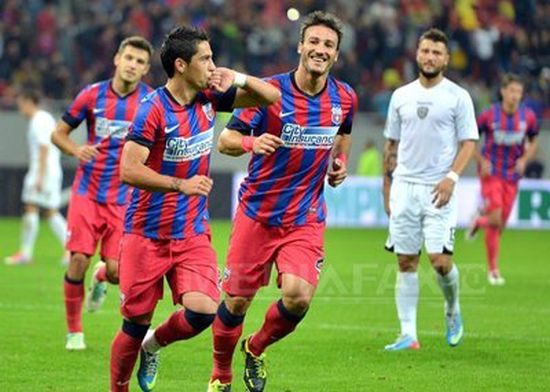 Romanian football team Steaua scored well in audiences this year, with its televised games. An analysis on monitored channels shows that, this year, 36 of Steaua’s game were broadcasted live. If it is to include registered games and re-runs, 162 games with Steaua were visible on TV.

The analysis doesn’t include the games broadcasted by DigiSport, as the TV doesn’t have its audience monitored.

This year, Steaua was visible on more TV stations, such as Pro TV, Antena 1, TVR 1, Dolce Sport, Sport.ro and Look TV. On the other hand, Sport.ro broadcasted Steaua-Barcelona historic game on May 7th, 17 years after Steaua won Champions Cup. The game attracted 161.000 Romanians, 100,000 of them living in urban areas
Steaua – Chelsea, most viewed game for Ghencea team.

The top of the 40 games broadcasted live is dominated, by far, by the double confrontation with Chelsea, part of Europa League competition and broadcasted by Pro TV. All over Romania, 4.75M people – half living in urban areas - watched the game that was played in Bucharest, with a similar number posted by London retour.

Next in top from audience’s point of view was the game Steaua – Petrolul from Romania’s SuperCup. Broadcasted by Pro TV, the game was watched by 3M people, half living in towns.
A third from Steaua’s games broadcasted on TV had audiences higher than 1M viewers per minute. Among the 12 games with over 1M viewers are games from Europa League, UEFA Champions League, Romania’s Cup and League I.
Most games from top “over 1M” were broadcasted on Pro TV (6 games), 3 on TVR and 1 on Antena 1.
Detailed audiences for Steaua’s games are available here.