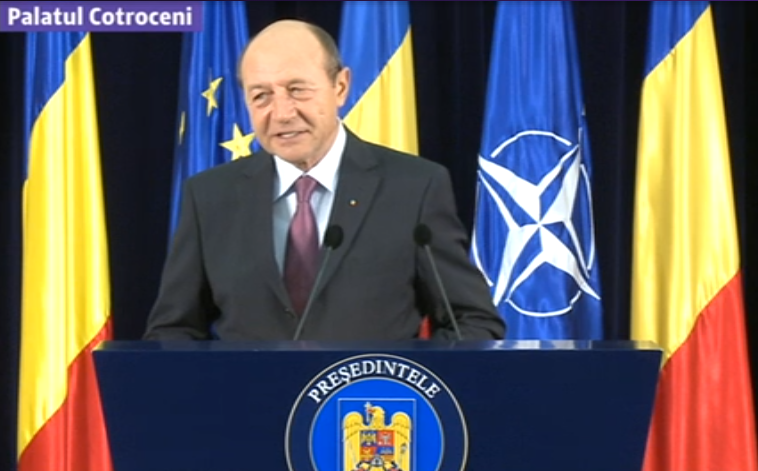 Traian Băsescu had an intervention from Cotroceni Palace, during which he stated that Romanian Television and the public radio are targets for Government and Parliamentary majority.

Romanian president also mentioned that, last week, he recalled from Parliament a law that was modifying the Law regarding the organization and functioning of Romanian Radio and Television Societies because it had a target “related to serving interests and put under total control state TV and radio to serve political interests”.

“Last week, I recalled from Parliament a law from 1994, which is the law regulating the way SRR and SRTV are functioning. Within this law, there were given 3 solutions. SRR and SRTV can make a juridical persona under private law, nothing suspect. Second was they can achieve the quality of associates within a juridical persona already existent. It could fit perfectly for TVs in insolvency that have their broadcasting stopped. And, the most interesting, is the 3rd one, that stated that SRR and SRTV can acquire social parts of shares within existent companies”, Romanian president said.

In the start of his speech, Traian Băsescu said he isn’t content that the emergency ordinance (OUG) related to the insolvency code was declared unconstitutional by Constitutional Court, and added that the games of power aren’t stopping here.
“As many TVs signaled and as I myself also said, there was an OUG on insolvency that was aiming for a special regime for TVs in financial difficulty. I remind you, stopping the broadcasting, no matter we talk about a radio or TV, until the reorganization plan is approved in instance, are deadly for those them. All would have become extremely dependent of Government, local administration, of those that had the solutions to stop broadcasting”, Băsescu mentioned.