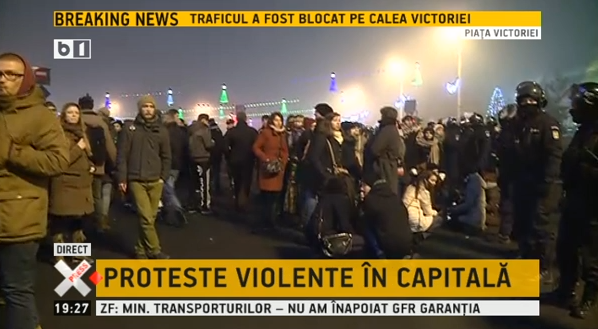 Romania TV only broadcasted a few minutes and continued with new unveilings over pensions’ law. Moreover, the same TV put on its crawler info from a poll that announced that Crin Antonescu was overpassed by Traian Basescu in polls, with first places occupied by Isarescu and Ponta.

After 20.00, Antena 3 gave up protests and broadcasted Carmen Avram’s show, Romania TV remained as silent as before, while B1 TV, Digi and Realitatea TV continued to broadcast.

ActiveWatch reacted after journalists from Antena 3 and B1TV were subjected to violences while they were covering the anti-Governmental protests in Bucharest. The organization considers inacceptable the incidents and states that “no matter how much some media institutions annoy you, please respect the journalists”.

Journalists from Antena 3 and B1TV were aggressed in physical and verbal manner during the protests. People participating to protests hit Antena’s car with their fists, broke the mirrors, spitted and sweared upon the crew.

When it comes of B1TV, the TV said that Jandarms’ spokesperson gave to its reporter swears instead of explanations.