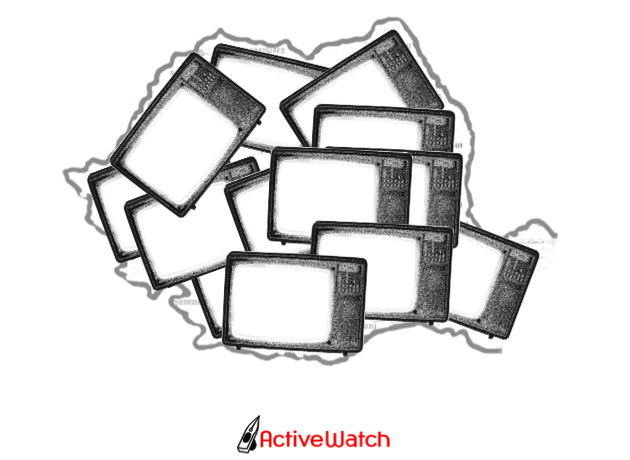 “Local TVs are vacuum cleaners for public money, a trampoline for political careers and a laudation instrument for politicians”, a study made by ActiveWatch concludes. The study was made during an entire year, is entitled “The political map of local TVs”, was made public on January 22nd and included interviews within the redactions of most important local TVs in 15 Romanian counties.

ActiveWatch made a portrait of the local TV station, with all it involves: the media worker, the way a meia business runs, the way the owners and managers are thinking and politic’s degree of involvement in media businesses.

Following the study, ActiveWatch reached to the conclusion that “local TV is a weapon for political fight and, in many cases, is sponsored with public money”.

“According to the data we were able to collect, there is a worrisome number of cases in which local TV represents a political and economical fight weapon, sponsored, directly or indirectly, with public money”, the study mentions.

ActiveWatched analized around 200 interviews and meetings that summed up around 300 hours of discussions with journalists, media managers and owners, local politicians and CNA representatives. Besides this, the study also included hundreds of hours of desk research, that collected data related to the situation of local TVs.

A few conclusions from ActiveWatch’s study:

The influence of politics. Almost half of the 56 local TV included in the research are influenced by politicians, directly or indirectly. Moreover, almost half of them appear in documents as directly benefiting of sponsorships from public money; more than likely, their number is higher than shown in the study.

Local TVs are founded not only by politicians but, in some cases, by Town halls or county authorities. There are media institutions that have their work spaces inside public authorities’ buildings.

The local TV is eyeing power’s wallet, but, many times, not as a watchdog.
„Local TV are more PR factors for politicians when they have the power.” (Marcel Tolcea, universitary professor, Journalistic section cathedra, Timisoara)

Politicians and businessmen know this mechanism and, as a consequence, they usually don’t give any importance to the journalist, being many times aggressive with those that mess up their PR strategies. Sometimes, politicians don’t care about the public either, considering it is stupid.

Financially, in most of the cases, TVs don’t generate any profit, and the salaries are at the lowest limit. The operational budget is, most of the times, sponsored from public money, directly or indirectly, with the TV lacking credibility and having an insignificant audience.

The problems of the local TVs identified by ActiveWatch:

The full study is available on ActiveWatch.ro and also includes some possible solutions for the mentioned problems

Local advertising problem. ”The business model based exclusively on advertising revenues exposes the quality journalistic act to risks / pressures that can influence it in a negative manner. The context of the local press amplifies those risks, as the private advertising market is weakly developed, contributing to the consolidation of private mass-media’s dependence of public money advertising or financing from owners close or coming from political circles”, the study shows.

“Media workers are, most of the times, poorly trained, poorly paid and they get to complete their revenues from other activities”, the study mentions.

Among the examples of “other revenues” are collaborations with clubs, where journalist are filming events, making photos and take care of lights and sound, being paid separately as the locations have activities mainly in week-end and during the night.

According to the interviews made for the study, a media worker earns, on average, around RON 600-1.500 per month.