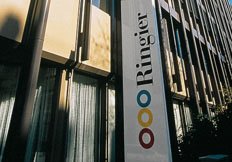 Ringier Romania, publisher of Libertatea tabloid, had, last year, an EBTDA profit of Euro 4M, according to its General Manager, Mihnea Vasiliu.

From fiscal point of view, the total revenues for Ringier Romania were of Euro 32M, down compared with 2012, when it posted Euro 39.9M revenues, according the annual report posted on the official website.

According to Vasiliu, the real revenues increased, and the decrease is only from accountability’s point of view:

“In 2012, the accountability system for distribution activities and online sales for third parties were different: the accountability department was registering both revenues, money sent by companies like EVZ and also the costs, respectively the money Ringier was paying to third parties. In 2013, it is accounted only the profit, a smaller amount. In reality, we are talking about an increase of around Euro 1M”, Mihnea Vasiliu explained, for Paginademedia.ro.

“For Ringier Romania, 2013 was the best year since the economical crisis started, in 2008”, Vasiliu added.

According to the report published on Ringier’s website, the highest revenues in Romania came from printing houses (around Euro 11.8M)