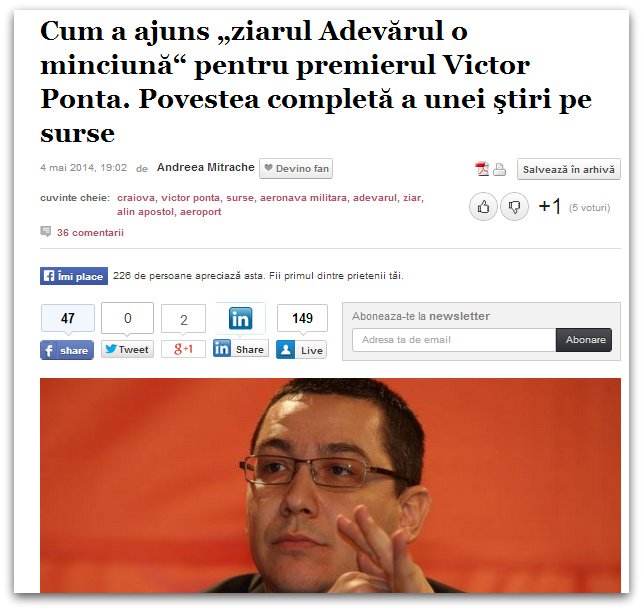 Romanian daily Adevarul decided to make public the name of a source that was at the origin of the news saying that Victor Ponta went, Sunday morning, from Craiova to Satu Mare with a military airship, HotNews.ro writes.

Unveiling the source is unprecedented, as HotNews writes, and is explained by Adevarul’s redactors through professional deontology.

„In order to inform correctly Adevarul’s readers over the information presented today and to insure them that the article, announced form the title as being based on sources, had a documentation according to journalistic deontology, Adevarul newspaper decided to unveil the quoted sources”, an article published on Adevarul’s website says.

The source informed Adevarul’s correspondent in Craiova that the prime minister left the city with a military aircraft that was heading for Satu Mare. The information was denied by Craiova airport’s director, Mircea Dumitru.

After publishing the info, Victor Ponta said that “ Adevarul newspaper is a lie”.
At that point, the journalists called the quoted source to ask for „a written proof or an official point of view to support the statements made as source”, as Adevarul mentions.

„In the same time, the journalists told to (…mentioned source, n.r.) that, in order to correctly inform the readers and protect the newspaper from being suspected of involvement into a political ame, they will be forced to unveil the source and to tell the way the events developed”, the article also mentions.